The Nigeria team consisted of nine participants from the Federal level (4 from the NPHCDA and 5 from the FMOH) and 25 persons from nine States (Bauchi 5x, Borno 3x Gombe 4x, Kaduna 3x, Kano 1x, Kebbi 1x, Ondo 2x, Sokoto 3x, and Taraba 3x. There was one Senior Health Expert from the World Bank, based in Liberia. There was one high-level Cameroon Inspector from the Ministry of Health. There were three participants from the private sector, carrying out CDV roles in Borno State. 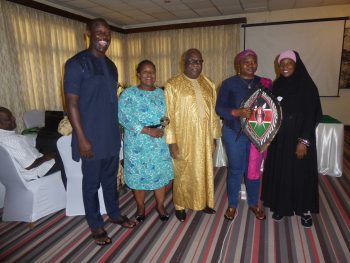 The five authorities tasked to maintain order in village 74

They actively supported the facilitation process and contributed to a congenial atmosphere.

EVALUATIONS OF THE COURSE

Thirty-two participants conducted the final exam. The average test score result was 70% (comparable to previous courses) with four certificates of distinction and three certificates of attendance. This was the second course in the 4-star Traveler’s Hotel, which provided the professional and pleasant ambiance for a smooth and problem-free learning process at the beautiful North Coast of Mombasa.

The daily evaluations yielded scores which were slightly above the previous 23 English courses. Yet, 41% of the participants felt that they were not sufficiently informed about the course in advance and some would have wished to receive the course book earlier. 43% of the participants felt the course was too short. The French spoken courses have one more day and this reduces the time pressure. We will also add one day to the Mombasa course of April 2019. Some participants commented that they would prefer more adult learning methodologies. With the next course extending by a day, the facilitation team will also consider the further deepening of adult learning, group work, exercises, etc.

Most participants came from Nigeria so that we could concentrate during this course on the specific issues of Nigeria.

PBF in Nigeria started in 2011 with a small pilot covering one LGAs in the three States of Adamawa, Ondo, and Nasarawa. It was scaled up within the three States in 2014 and in 2017 the PBF approach expanded towards five additional States in the fragile and unstable North East of the country.

MAIN STRUCTURAL CHALLENGES OF THE HEALTH SYSTEM IN NIGERIA

ENCOURAGE REFORMS – BASED ON THE PBF BEST PRACTICES AND PARADIGMS

CHANGE SOME FEATURES OF THE PBF DESIGN IN NIGERIA

Borno is the epicenter of the conflict in NE Nigeria with the Boko Haram insurgency. Due to displacements, the population is highly mobile and there is insecurity across vast areas in the state with vandalized health structures. 15% of the population is not accessible at all for health workers. The PBF program so far only signed 108 or 27%  of the contracts on a total of 399 desired contracts (this ratio excludes the inaccessible areas).

Due to concerns about gaming, whereby false data were produced, the PBF program decided to switch from the carrot + carrot approach towards the carrot x stick approach. This lead to frustrations among health facility staff and several health facilities have since refused to sign contracts. The highly dynamic population and the insecurity in the state make patients reluctant to give their true addresses, which makes verification an even larger challenge and applying punitive sticks under such circumstances may be counterproductive. Another demotivating factor is that the PBF program suffers from long payment cycles, which is particularly damaging in the unstable environment of Borno State.